Bill joined the friendly team here at Southern Mobility Vehicles in July 2019 after working as an office manager for a company that specialised in MOD procurement near Southampton.

After 18 years, redundancy was to become the opportunity for Bill and Patrick to work together once again. Bill is responsible for the efficient operation of the office and keeps us all in line managing the database and ensuring the smooth transition of our wheelchair accessible vehicles from their arrival at the yard to point of delivery to their new owners; you, our customer.

He is also responsible for handling the phones, booking viewing appointments for our WAVs and managing the company’s day-to-day operations.

Since they were 11 years old, Patrick and Bill had known each other and 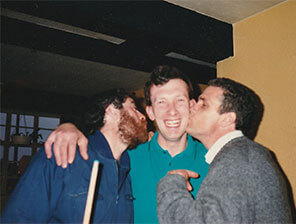 worked together many years before running the Richmond Arms in Chichester with great success and a not inconsiderable amount of fun and mischief.

Bill was popular with everyone who crossed the pub’s threshold, as you can clearly see in this picture of him with two of the locals.

Bill is a personable guy who is always willing to help, which has always made him very popular. His ability to put anyone at ease is a real asset here at Southern Mobility Vehicles. After all, acquiring a wheelchair accessible vehicle is a need that most would not want to see in their lifetime, so having a friendly, helpful face is always going to ease any concerns people may have about approaching us.

Bill still bumps into many of the locals he served back in the day when of course, he had a little more hair than he has now, but as we know, time waits for no man! Bill is loyal, trustworthy and always willing to help those who need a helping hand and he is a credit to himself and all that are fortunate enough to meet him in life. 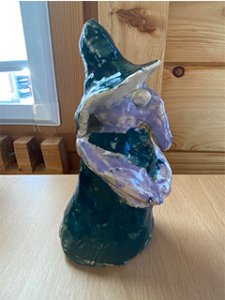 As Bill was born in a hospital near Wimbledon Common, this makes him a Womble, and the Wombles of Wimbledon are coming to you; sorry, we just could not resist that. He also bears an uncanny likeness to Tobermory, and he does like to keep the office rather tidy.

So the Womble in him is alive and well, although we do tend to keep that quiet and fortunately, it does not appear to have become an obsession yet. Here is an early “selfie” in clay that Bill created of Tobermory in his own image back in his junior school days. This is for all the youngsters out there who may remember the iconic children’s show “The Wombles”.

As well as his efficient Wombling in the office, Bill is still an AFC Wimbledon fan and, as a youngster, went to many games at Plough Lane. He recalls the day when his team fought to get into division four, Bill went to many games as a youngster at Plough Lane to support them. Likewise, Bill also recalls the day AFC Wimbledon met with the mighty Leeds United in the late ’70s and, his team beating Liverpool FC in 1988. He still follows them today; we just aren’t quite sure where! 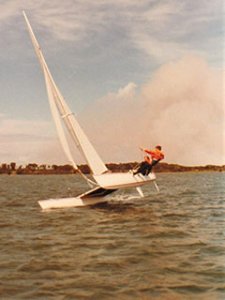 into life beside the seaside by taking up sailing. He also became a Sea Scout and has thoroughly enjoyed a strong relationship with the sea to this day.

Bill met Patrick at Chichester Canoe Club shortly after he moved to Chichester and they were to form what was to become a lifelong relationship. Both attending Chichester High School for Boys and now, once again, they are working together. Pictured right is Bill out on an Olympic class Tornado’s trapeze at full tilt back in the ’80s.

After leaving school, Bill went on to Plymouth Polytechnic and studied civil engineering. Whilst he was studying, Bill was lucky enough to do a scuba diving course and had the opportunity to dive on many WWII sunken ships in the area. He was to carry on scuba diving as a hobby for several years after leaving Plymouth especially when holidaying in sunnier climes. 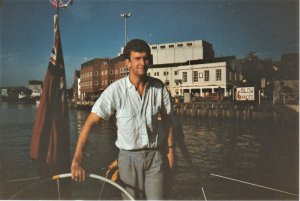 After his Plymouth days, Bill moved back to Chichester to work with his stepfather, who was a garage owner running a small fleet of black taxis whilst in London. Moving down south had led his stepfather towards starting his new business servicing and repairing marine engines.

Bill enjoyed the practical side of the work whilst taking some time out to think about his future, and as he loved to be on the water, the job suited him very well. During this time, Patrick approached him about co-managing the Richmond Arms in Chichester with him, and he accepted. He had many happy times there, meeting some interesting characters as the business grew.

Bill recounts how when they started at the Richmond Arms, it took just a few 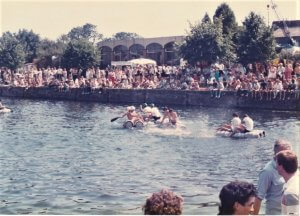 pounds in the first week, and they barely saw another soul for days on end, and when they left, the pub had never been busier, taking between three and four thousand a week in the late ’80s. Pictured right is the annual Beer Barrel Race which was the main event of the year to manage, and despite the long day and backbreaking work, it was always great fun to be involved in such a fun event.

Bill was to move on to work for an accountancy firm, and because of his mathematical ability, stock-taking was to be his next calling. He worked for several years in this role before a chance meeting with one of the company directors he was to work with for almost 18 years. Procurement was to become a stable environment for Bill, during which time he built great skill in managing the administration side of the business on a hands-on basis. These years served him well when Patrick approached him about a role at Southern Mobility Vehicles working with Patrick once again, but Bill decided it wasn’t the right time.

Two years later, Bill’s redundancy was to see him working with Patrick once again; it seems it was meant to be. Bill has settled into his role as the WAV admin Manager and eagerly awaits to find out how he can help anyone learn more about wheelchair accessible vehicles. It has been a steep learning curve for him with such a career change, but he has never looked back and Bill thoroughly enjoys all aspects of what he does. Whether it be finishing off the document preparation ready for Jim to deliver a customer’s new WAV or hoovering out the back of an accessible vehicle after a customer viewing, he is always willing to get stuck in with a smile and, he is always happy to help.