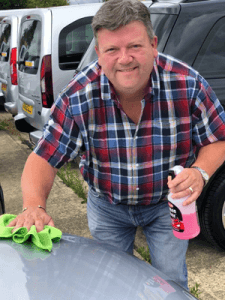 Patrick joined Southern Mobility Vehicles in November 2016 after a chance meeting with Peter Zanelli, the business owner. He quickly realised that this specialist niche business needed the genuinely caring presence he found within the company to become more apparent on their website. Peter, the boss, had not wanted a car salesman because the business’s resemblance to the standard car trade ended with the vehicles they were marketing having four wheels.

Wheelchair accessible vehicles or WAVs have very little in common with the cars that most people had bought in their lives due to the need for the space inside to be different for wheelchair user access needs and wants. Patrick had never been in the motor trade, so he knew his previous twenty years of giving independent advice needed to come into play.

In 2016, Patrick got to work learning as much as possible about the different vehicles and, most importantly, the varying wheelchair access conversions available. Before viewing their stock, Patrick quickly realised that the customer needed to know more about WAVs, which are always a need and never want. Being new to this specialist marketplace also enabled Patrick to look at the business with fresh eyes and apply his previous professional outlook to his newly found career.

The WAV industry is closely associated with the motor trade by the nature of the four wheels and the historical “hard sell” which many have experienced for themselves. Traditionally, buyers have often felt uncomfortable with the sometimes rather rushed approach in the second-hand car market. Patrick could sense this when he greeted customers as they often seemed reluctant and uncomfortable.

After all, there is probably nothing worse than having to buy an expensive product you don’t want and probably weren’t expecting to need. Not only that, customers would seemingly have to buy from the same industry that filled them full of dread and had no desire to approach at the worst possible time. Patrick could only imagine how hard it must have been for most to muster up the courage to visit the company to view their stock, so Patrick vowed to change this perception for Southern Mobility Vehicles.

Patrick believes that the fundamentals of caring should apply in every way of life, whether towards humanity, flora or fauna. Still, he sees genuine care so often lacks in businesses. Patrick’s previous experience as an independent investment advisor had taught him very early on that no customer would swap a large cheque for a future promise on paper without trust being in place first. Trust comes with how an experience plays out for the customer, and only when they feel ready to proceed will they do so. Then if you keep supporting and helping your customers, they keep coming back; it’s not rocket science.

Patrick feels that many industries have become short-sighted about customer care; many companies think throwing vast sums of money at marketing works long term. However, selling customer care as a marketable product isn’t good enough; care should be at the core of any being, especially in a business. So instead, investing in people is the only way to create and build a successful business. Any success, of course, begins in and with the people you employ.

Early on, Patrick had formed a vision of the people he wanted to bring into the company, and with Jim on board, Patrick finally managed to get his lifelong and trusted friend Bill onboard. Bill had worked with Patrick back in the ’80s when they ran the Richmond Arms in Chichester together with great success.

Here are Patrick and Bill with the winners of the Chichester beer barrel races back in the late 1980s, presenting the trophy to the lucky winners. With great success and in a very different industry, they had consolidated a long-standing friendship and proved they could work effectively together.

This valuable and rare combination became a solid foundation yet again in July 2018 when Bill joined Patrick at Southern Mobility Vehicles. 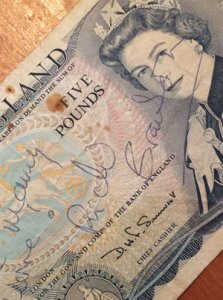 Patrick has always admired hard work and respected the setbacks and failures which lay along the road to success. He believes this is true of Richard Branson, whom he has admired and respected since 1986. Shortly after Virgin Atlantic Challenger II berthed at Tower Bridge in London, Patrick met the man himself. As a lover of all things nautical, Patrick went down to look at this record-breaking beauty. He was lucky enough to meet Richard, whom he found to be most engaging despite having completed an exhausting Atlantic crossing.

Patrick was then fortunate enough to be invited below deck to see how the Challenger II ticked. To stand in the same place with the two massive V12 MTU engines still hot from their recent burn-up the Thames was incredible. As he was leaving, Patrick asked Sir Richard, as he is now known, for his autograph without realising he had no pen or paper. Sir Richard found a pen, and Patrick found a rather expensive piece of paper, a £5 note, the only one he had at the time. Pictured left, and despite some very lean times, Patrick has treasured this momento from 1986 to today, some 35 years later.

Patrick is an advocate of really listening to what customers seeking specialist transportation want. Over the years, he has built a considerable knowledge of what works, what doesn’t and most importantly, what customers want. Needs are all very well, but he wants to help people see their wants more often in WAVs. Southern Mobility Vehicles’ customers have constantly brought his focus towards the little things, because these are the things that are most significant to seekers of WAVs.

For example, many wheelchair or scooter accessible vehicles lack in areas that really do matter to wheelchair users, drivers and passengers alike. Things like legroom in the second row, a wheelchair user getting between seats rather than behind them and light and bright interiors are all too often lacking.

There are many factors which an understandably reluctant buyer seeks in a WAV that will help them feel better about seeking an accessible vehicle. Patrick has made it his business to ensure the team does everything they can to accommodate everyone’s needs when they engage with the company; after all, customers should be treated like kings and queens.

Patrick has spent almost five years developing, designing and having high-quality new WAVs built for Southern Mobility Vehicles. He then began to integrate and fine-tune their new build WAVs to ensure that opening up one of their new WAVs would bring a smile to peoples’ faces. Patrick believes that the seemingly minor improvements Southern Mobility Vehicles have made directly result from listening to what their customers truly want to see in their wheelchair and scooter accessible vehicles.

company has recently launched the SmartFlare ramp which is designed and exclusively produced for the company. Now wheelchair or scooter users can enter a WAV from an angle giving flexibility when parking, accessing and leaving vehicles. Patrick has seen greater confidence in wheelchair users when approaching or leaving their WAVs via the SmartFlare ramp as it means larger vehicles don’t need to have quite so much space at the rear of the WAV to allow a wheelchair user to onboard.

Patrick then began to integrate and fine-tune their new build WAVs to ensure that opening up one of their new accessible vehicles would bring a smile to peoples’ faces. Patrick believes that the seemingly minor improvements Southern Mobility Vehicles have made directly result from listening to what their customers truly want to see in their wheelchair and scooter-accessible vehicles.

Seeing the smiles of satisfaction it brings to grateful people in need of something functional and beautiful is a rare pleasure in life. Most significantly, it creates the genuine desire to begin to want a WAV as an essential requirement to get from one place to another in the easiest possible way. After all, what could be more satisfying than having a vision, creating it on paper and then have it built by experts.